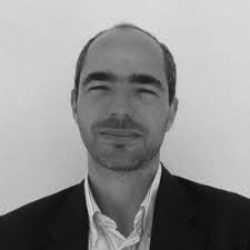 André Silveira is a postdoctoral researcher and works on issues related to environmental governance, water and society in socio-ecological systems. His research focuses on institutional capacities to protect the quality of water resources and to promote environmental justice at various spatial and temporal scales.
Prior to joining the research group “Environment, Territory and Society” in May 2016, he was a postdoctoral researcher at the Cambridge Institute for Sustainability Leadership, where he investigated the theme of social and environmental justice in the transition to post- carbon. He also developed his teaching activity, teaching about “environment, society and development” in the context of the undergraduate degree in geography of the University of Cambridge.

At the beginning of 2016, he was also a visiting professor at the University of San José, Macau, where he taught environmental management tools (government and non-governmental) in a master’s program.
A PhD in geography from the University of Cambridge (UK) in 2015, his doctoral project focused on the relationship between polycentric governance systems and institutional capacity for adaptive management of water resources. This work focused on the European Union and China, adopting the basins of the Rhine and the Pearl River (Zhujiang) as case studies.

In the period 2009-12, he led a collaborative program to investigate water governance challenges at the hydrological basin scale, along with other institutional partners from the United Kingdom, the Netherlands, Germany and China. As a result of this work, he was invited to provide consultancy services in the EU-China cooperation program for river basin management (2008-2013) conducted by the European Commission and the Chinese Ministries of Water and Environmental Protection.

Between 2001 and 2008, he resided in China, namely Macau, Guangzhou and Beijing. During this period, he was a researcher at Instituto do Oriente, Institute of Social and Political Sciences at the University of Lisbon, and coordinator of projects at the International Institute of Macao. His work in this context focused on processes of social, economic and political change in Macao, economic and political reforms in the south of China, and regional cooperation for the management of natural resources. During this period, he was also a visiting scholar at the Institute for Urban and Environmental Studies at the Beijing Academy of Social Sciences and the Department of Water and Environment at Sun Yat-sen University in Guangzhou.

Observa takes care that the information provided on this site is current and accurate. If, however, you found an error or omission, please report it to the email observa-ics@ics.ulisboa.pt. Thank you.